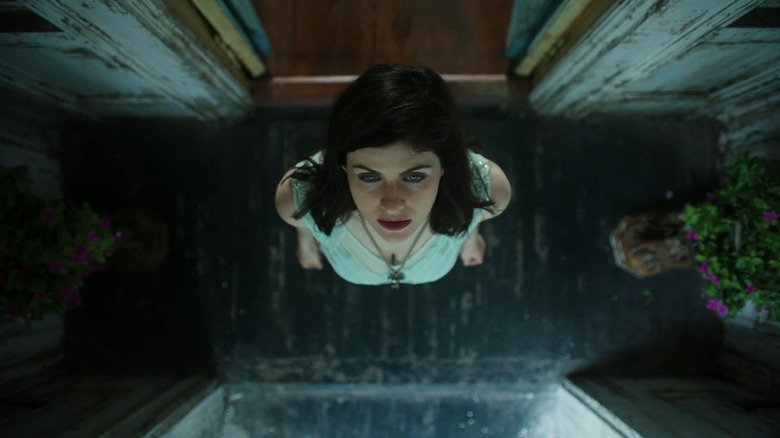 Did you think that AMC would stop at adapting just “The Vampire Chronicles?” We’re here to tell you that is far from the case, as the supernatural trilogy “Lives of the Mayfair Witches” is about to come to the small screen. “Anne Rice’s Mayfair Witches” has been in development at AMC’s streaming platform, AMC+, for some time now, and we just got our clearest look at the adaptation yet.

The series, the first season of which will largely follow 1990’s “The Witching Hour,” centers around Dr. Rowan Mayfair (Alexandra Daddario), a neurosurgeon who unknowingly harbors some unusual abilities. When she finds out that she is the next in line to inherit her mysterious family’s dynasty, she discovers the reason why they are so secretive; they are a group of powerful witches. If that wasn’t enough, a sinister spirit by the name of Lasher (Jack Huston) has returned to once again wreak havoc on the Mayfairs, with its eyes set on Rowan in particular.

If you were curious, then yes, “Mayfair Witches” is likely in the same continuity as “Interview With The Vampire,” as both book series crossed over with each other. However, it’s unlikely we’ll be seeing Lestat (Sam Reid) or Louis (Jacob Anderson) alongside Rowan any time soon.

Check Out The Mayfair Witches Trailer

Daddario, who received an Emmy nomination for her work on the first season of “The White Lotus,” won’t be the only notable name on the show. Harry Hamlin (“Clash of the Titans,” “Mad Men”) will play Cortland Mayfair, Rowan’s father and the current patriarch of the family, with Annabeth Gish (“The Haunting of Hill House,” “Midnight Mass”) playing her mother, Deirdre. Tongayi Chirisa will be playing Ciprien Grieve, an original character for the show that appears to be some sort of journalist or investigator. Either way, he looks to be an important ally for Rowan as the series continues. Beth Grant, Jen Richards, and Erica Gimpel also star.

“Mayfair Witches” will premiere on AMC+ on January 5, 2023. Check out its official synopsis below:

Based on Anne Rice’s “Lives of the Mayfair Witches,” “Mayfair Witches” is an exploration of female power and the mortal implications of our decisions. “Mayfair Witches” focuses on an intuitive young neurosurgeon who discovers that she is the unlikely heir to a family of witches. As she grapples with her newfound powers, she must contend with a sinister presence that has haunted her family for generations.

Read this next: The 15 Best Horror TV Shows Of All Time