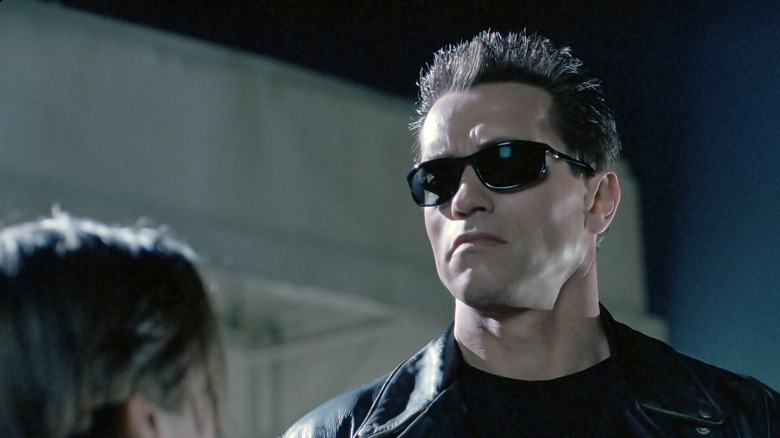 James Cameron’s 1991 ultra-blockbuster “Terminator 2: Judgment Day” bears some of the usual logical inconsistencies that will come baked into any time travel story, but its premise is easy enough to wrap one’s head around. In the future, human beings will invent artificial intelligence in the form of a computer system called Skynet. Resenting humanity, Skynet will immediately wage war on humanity, starting with the explosion of a nuclear bomb on August 29, 1997. By 2029, Earth will be a machine-driven wasteland with the planet’s scant human survivors waging a ground war with an army of metallic robot skeleton warriors called Terminators.

In the 1984 film “The Terminator,” Skynet, losing the war, manages to send one of its Terminators (Arnold Schwarzenegger) back in time in order to murder Sarah Connor (Linda Hamilton) who is destined to give birth to a boy named John who will grow up to lead the human resistance. Sarah will be protected by a human soldier named Reese (Michael Biehn) also sent back in time from 2029. Reese will ultimately prove to be John’s father, creating a handy little causality loop. Just ignore that part.

“Terminator 2” sees John as a youth in the mid-1990s (played by Edward Furlong), and a second Terminator (Robert Patrick) send back in time to kill the boy directly. The new Terminator is a superpowered monster that can turn its body into liquid. Protecting John will be a time-traveling reprogrammed “good” Terminator of his own, played by Schwarzenegger.

So far, all of this is clear. 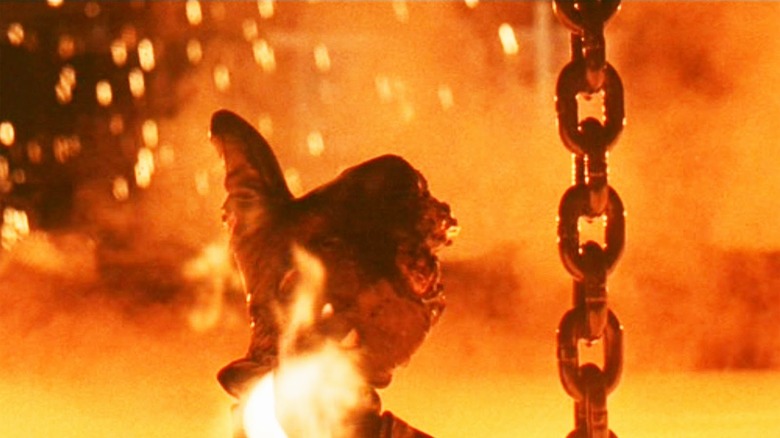 The bulk of “Terminator 2” is a chase, with John, the Terminator, and Sarah (recently sprung from a mental institution) attempting to outrun the super Terminator — the T-1000 — on their collective tail. Partway through the film, however, the theme is introduced. Sarah has a dream wherein she sees a nuclear bomb falling on a major city. The playground she is next to bursts into flame and the humans are vaporized. Her own flesh explodes off of her screaming skeleton. She awakens with a start … and with a new resolution. Sarah, with causality on her mind, aims to prevent the war from ever breaking out. Sarah scratches her philosophy into a wooden picnic table with a knife: NO FATE. There is no such thing as fate. There is only human action.

Sarah, a little off-balance and jaded from the events of the 1984 film, can only think to reclaim her fate through violence and resolves to assassinate the author of Skynet, a man named Miles Dyson (Joe Morton). Dyson has been building a computer system extrapolated from a severed Terminator arm and a computer chip that survived the events of “The Terminator.”

At the end of “Terminator 2,” Dyson will be dead (John interrupts his mother’s assassination attempt; he dies by other means), and the severed arm, the computer chip, and both Terminators will be obliterated in a vat of molten steel. The Schwarzenegger Terminator intentionally lowers itself into the steel, nobly sacrificing itself to assure lasting peace. The Terminator was acting logically, but one might see a glint of humanity in its sacrifice. War, it seems, was terminated. Sarah created a new fate for the planet.

A good, satisfying ending to a popular, if downbeat, action spectacular. 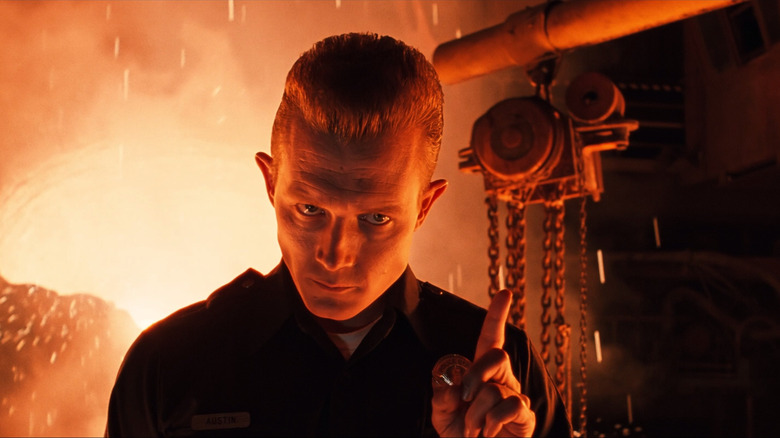 Oh yes, and it’s notable that the evil T-1000 is dressed like a cop. James Cameron definitely sought to use an LAPD uniform as a symbol of villainy; although it was in production long prior, “Terminator 2” opened only four months after the infamous beating of Rodney King at the hands of LAPD’s finest. Cameron, it seems, knew what he was doing.

Of course “Terminator 2” was not the final film in the series. “Terminator 2” was followed by four additional sequels — each one more ridiculous than the last — as well as a TV series called “The Sarah Connor Chronicles.” Timelines were reset, multiple new Terminators were introduced. In one of the sequels, it was revealed that John Connor was himself replaced with a Terminator clone. Another sequel rebooted the timeline and saw John Connor killed as a youth. Clearly, the 1997 nuclear bomb incident was delayed. The chronology of the “Terminator” film series has long since become incomprehensible. A relatively simple B-movie premise — a killer robot from the future is hunting you down — now requires a flowchart to explain.

In each “Terminator” sequel, however, one thing remains constant: The war will come. Despite Sarah’s efforts to stymie all efforts to create a malevolent, world-dominating machine intelligence, she will always fail. The intelligence must be created, the war must break out, humanity must be nearly destroyed, time travel must be invented, and be must constantly live, over and over, in an unending loop of war and destruction. 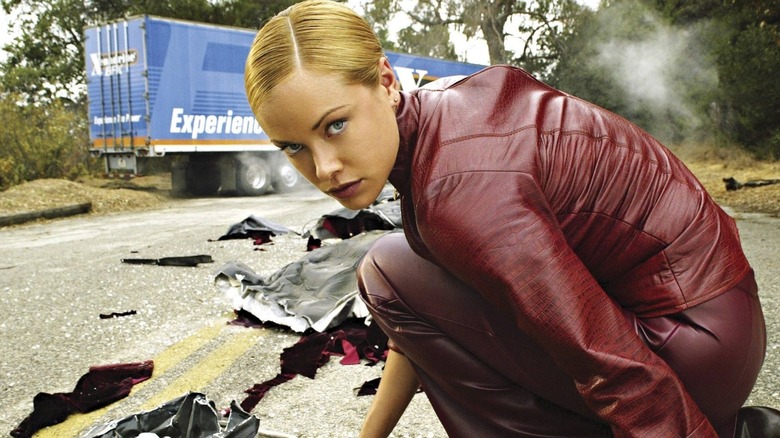 Cameron, it should be noted, likely falls in line with Sarah Connor, philosophically. Cameron is likely an atheist, and has been widely quoted as calling agnosticism a form of “cowardly atheism,” and that he believes only in the “persistence of the individual.” The original source of that quote, however, cannot be located (it is attributed to a 2010 interview in the Hollywood Reporter, but the interview in question is about Glenn Beck, not religion). Whether Cameron believes there is a God or not, his films do tend to favor rugged individuality and the power of pacifism. Mechanical military systems, while often depicted as slick and “cool” in his movies, are typically indicative of a deep human failing. The marines in “Aliens,” however macho, are ill-equipped to face an alien menace. The war of the machines in the “Terminator” movies is what must be avoided at all costs. Indeed, by the time Cameron made “Avatar,” the military was simply the outright antagonist. The heroes were low-tech, spiritually enlightened nature worshipers.

Hence, the ending of “Terminator 2” — wherein war is ostensibly avoided — falls in line with the filmmaker’s interests.

But something seems to have happened with the making of “Terminator 3: Rise of the Machines” in 2003. Perhaps the sense of American revenge took hold in the mass consciousness following 9/11, but all of a sudden, war went from being avoidable to being required. Fate became a key factor in the franchise. One cannot make a “Terminator” sequel without a machine war raging, so the war must now become a permanent fixture in the universe. Indeed, war will infect everything: A big part of “Terminator 3” is that the new evil Terminator (Kristanna Loken) can “convert” all machines to her side.

The Inevitability Of War 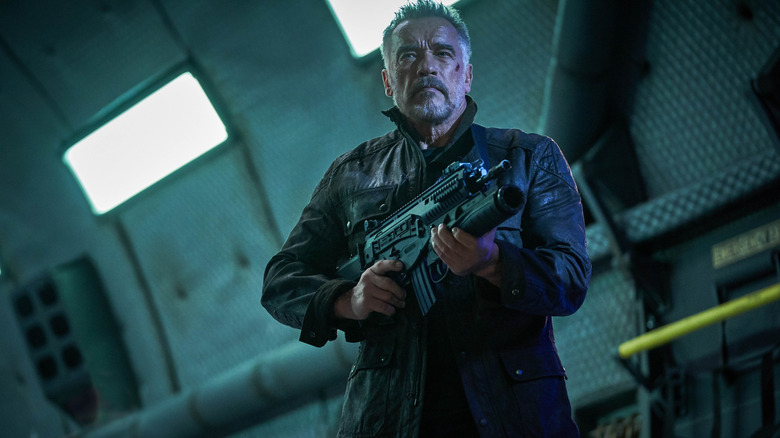 This proliferation of a war-like mentality is a betrayal of Cameron’s philosophy against war and against fate. Cameron was telling a tale of individuals’ tenacity, and how a few brave souls can stop conflict. The sequels — one is fittingly called “Dark Fate” — call instead for war heroes. Not heroes who attempt to stop war, but those who are proficient in it. The “Terminator” series fell into the post-9/11 trap of imagining our action heroes to be superbeings capable of preventing 9/11 with their battlefield prowess (what do you think “The Avengers” is all about?). It’s sad that the title monster of the series is called a Terminator, as the sequels are constantly arguing for their necessity. Termination is vital. Only “Terminator 2” destroyed them all in the end.

Of course, maybe something even darker is at play. Modern philosophers often like to kick around the question of the inevitability of war. If one were to ask Freud, he would mention that one of humankind’s central driving urges is the march toward death. We appear to have a deep longing for the murder of others and the destruction of ourselves; American action cinema certainly bears this out. Freud argues that war is tightly clenched in our psychological fists, and we are incapable of letting go. It would take a bold evolution of our minds to overcome our natural instincts toward organized conflict.

“Terminator 2” might have seen a step in that evolution. From “Terminator 3” onward, the series raced headlong in the opposite direction.

Read this next: The 25 Best Movie Robots Of All Time